The Princess Of Wales's Royal Regiment

The Princess of Wales's Royal Regiment (PWRR) is today's infantry regiment of Surrey. It is also the local regiment of Kent, Sussex, Middlesex, Hampshire, the Isle of Wight and the Channel Islands. It has two regular battalions (1st and 2nd), one Territorial Army battalion (the 3rd) and one additional TA company at Edgware (within the London Regiment).

The latest amalgamation took place as a result of the end of the Cold War and amidst general large reductions within the British Army's strength. Thus in 1992, the new Regiment was formed from the amalgamation of The Queen's Regiment and The Royal Hampshire Regiment. The 9th September was the founding date chosen. as it was the anniversary of the landings at Salerno, when both the Queen's and Hampshires were heavily committed. On amalgamation, the 5th and 6/7th TA battalions rebadged to the new Regiment, but in 1999. as the TA infantry was reduced from thirty-three battalions to fifteen, they merged to form the new 3rd battalion. Further re-alignment for the 3rd Battalion took place in 2006, when under Future Infantry Structures (TA), it took responsibility of the PWRR-badged Portsmouth company.

Operational experience has gathered pace since 1992 making the PWRR the most decorated regiment in the British Army. Both regular battalions served a number of times in Northern Ireland as it moved closer to relative peace and the end of Army operations; Operation BANNER finished in July 2007. During its 38 years, the Operation had dominated the lives of most soldiers in both of the forebear regiments and the PWRR. The 2nd Battalion had some of the last troops deployed 'on the streets'.

The Regiment also saw service in Rwanda, Bosnia and Kosovo; the 1st Battalion completed two tours in Kosovo. In these countries, the 'Tigers', as the Regiment is nicknamed, again helped to placate antagonistic populations and deployed, mainly, in either the Warrior or Saxon vehicle. Individuals served in many 'hot spots' around the world, including Sierra Leone. Territorial soldiers, many of them from Surrey, also had an increasing opportunity to deploy on operations, as individuals, in support to their regular cousins.

Operations in Iraq and Afghanistan have dominated the life of the Army and the Regiment in this decade. The invasion of Iraq in 2003 marked the beginning of Operation TELlC, whose British combat operations were officially completed in 2009. All three battalions and the Queen's Regiment Company of The London Regiment made significant contributions to this operation. The 1st Battalion conducted three tours, the 2nd Battalion deployed once and the T A attached many individuals to both of their regular counterparts and other units.

Significantly, the Regiment now has its first Victoria Cross holder, Lance-Corporal Johnson Beharry. This was won on the 1st Battalion's 2004 tour. As a private soldier, driving a Warrior armoured vehicle, he carried out two individual acts of great heroism by which he saved the lives of his comrades. Both were in direct face of the enemy, under intense fire, at great personal risk to himself (one leading to him sustaining very serious injuries). His valour was worthy of the highest recognition. The last Surrey regiments' soldiers to have won this award were Lieutenant AG Horwood of The Queen's Royal Regiment and Captain ECT Wilson of The East Surrey Regiment, both during the Second World War.

During the 2004 Iraq tour, the 1st Battalion of the PWRR earned one Victoria Cross, two Conspicuous Gallantry Crosses, two Distinguished Service Orders, seven Military Crosses. one Member of the British Empire, sixteen Mentioned in Despatches and one Queen's Commendation for Valuable Service. The Commanding Officer. Lieutenant Colonel (now Brigadier) Matt Maer stated "It has been said that 1 PWRR Battle Group faced the most constant period of conflict of any British Army unit since the Korean War.......The Battle Group in Maysan Province faced over 100 contacts in one day alone and close to 900 over the tour......Every single man who deployed on Operation TELIC had been in some form of contact. That in itself made a tour like no other". Awards continued to be earned by the Regiment on successive tours, including the award of the American Legion of Merit to Major General Paul Newton, the Colonel of the Regiment.

The conflict in Afghanistan continues and the British involvement is now called Operation HERRICK. Allied personnel began their operations in Afghanistan in 2001 and the 3rd Battalion provided a platoon in Kabul on what was called Operation FINGAL in 2003. Greater numbers of British personnel have deployed since then and the PWRR has made its contribution from both regular and TA personnel. The most significant contribution, so far. has been made by the 2nd Battalion, from its base in Cyprus. For over a year. from 2008 to 2009, the Battalion took the Theatre Reserve Battalion role. This involved continual deployment to Afghanistan of at least one company, often two, along with Battalion Headquarters. Within the same period, the 1st Battalion provided one company to Operation HERRICK. Both battalions and many regular and Territorial soldiers are due to continue to contribute to this operation. To illustrate their commitment, three more Military Crosses were awarded to members of the Regiment in September 2009 - one from the 1st Battalion and two from the 2nd.

The new Regiment has continued to maintain the traditions of the past. whilst establishing a reputation, second to none, in its newer guise. It is particularly proud to uphold the traditions and standards set by its forebears from Surrey. 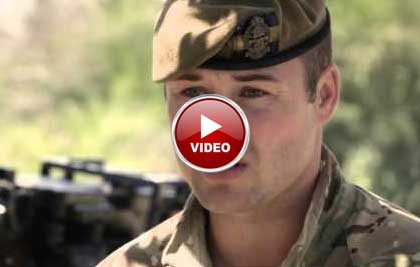