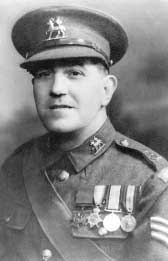 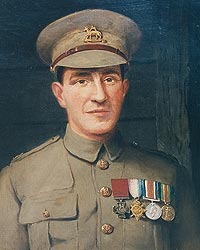 Born in Peckham, London, on 24th August 1891. Jack Harvey joined the Army on 26th November 1914. All his service was on the Western Front.

He received his Victoria Cross from HM King George V at Buckingham Palace on 8th March 1919, and died in Redhill, Surrey, on 15th August 1940.

The Queen’s Royal Surrey Regiment Association was instrumental in erecting a headstone on his grave in 1984.

“For most conspicuous bravery and disregard of personal danger in attack. When the advance of his company was held up by intense machine-gun fire, Private Harvey at once dashed forward through heavy enemy fire and rushed a machine-gun post, shooting two of them and bayoneting another. He then destroyed the gun and continued to work his way along the enemy trench and, singlehanded, rushed an enemy dug-out which contained thirty-seven of the enemy and compelled them to surrender. By these two acts of great gallantry he saved his company heavy casualties and enabled the whole of the attacking line to advance.

Throughout the entire operation he showed the most magnificent courage and determination and, by the splendid example which he set to all ranks, materially assisted in the success of the operation”.