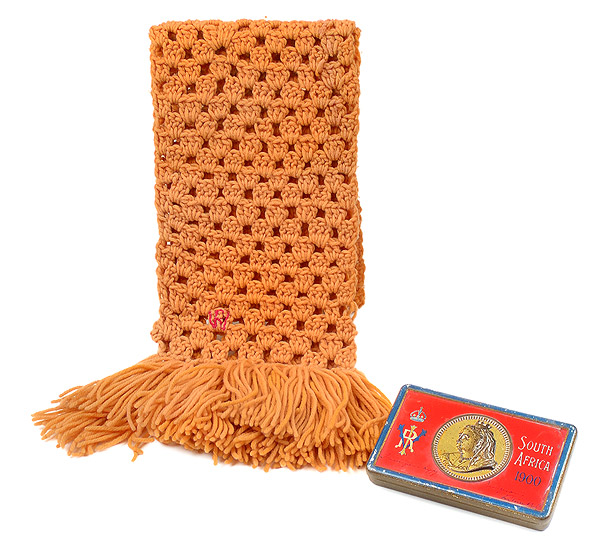 An unusual award, in the form of a long scarf crocheted by Queen Victoria, was made to selected servicemen during the South African War. It was apparently worn over the shoulder, passing under the shoulder strap, across the chest and buckled on the right hip. The description of the scarf is given as "..crocheted in Khaki-coloured Berlin wool, approximately nine inches wide and five foot long, including a four inch fringe at each end, and bears the Royal Cipher V.R.I. (Victoria Regina Et Imperatrix)..."

At one time even the number of scarves was in doubt, but it has been confirmed that a total of eight were awarded, four to British servicemen.

The recipients were required to be chosen by a vote of the NCOs and men of each unit, and approved by the Commanding Officer. The four scarves awarded to the British Army went to men of the 2nd Brigade, 1st Division, under the command of Sir Henry Hildyard. These were:

Questions have been raised as to whether Queen Victoria had crocheted the scarves herself but it was reported that, during the presentation of the scarf to Dufrayer (a Colonel recipient) in Australia by HRH The Duke of York (later King George V), the Duchess of York (later Queen Mary) had informed one recipient that she had helped the eighty-two year old Queen when she had dropped stitches whilst making the scarves.

There has been much speculation as to the exact degree of honour that the award of the scarf carried. It was at one time believed to be equivalent to the Victoria Cross but this is not the case. During 1902 the New Zealand Government requested that the title 'Queen's Scarf' be used in the Army List and other official documents but, in a reply dated 4 June 1902, the Secretary of State refused to grant permission. The question of precedence has continued over the years and, even as late as 1956, it was raised again, when a descendent of one of the holders reqested permission to attend the VC Centenary Celebrations. The official reply stated '...while the Queen's Scarf is regarded as a unique and most distinguished award, relatives of those who received it are not being included in the present ceremony as it does not carry equal status with the Victoria Cross....'.