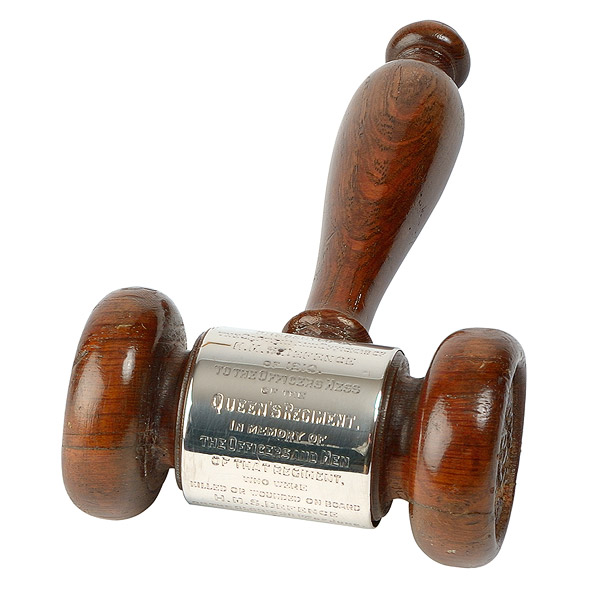 Symbolic of the close association which existed between the Royal Navy and the Queen's Royal Regiment, there is, a handsome gavel which was presented to the Officers' Mess 1st Bn The Queen's Royal Regiment in 1911 by Captain of HMS Defence of the First Cruiser Squadron, Royal Navy. Its silver mounted inscription reads:-
Presented by the Wardroom
Made from wood of
HMS Defence 1861-1904
Fourth of her name a self explanatory covering letter, shown here, gives further information.

HMS Defence was a Minotaur Class armoured cruiser of 14,600 tons. Built at Pembroke Dockyard, she was launched in April, 1907 and completed in February, 1909.

She was coal fired and her main armament of four 9.2 in guns was supplemented by secondary armament and five submerged torpedo tubes. Her original crew complement was 755. Operationally she carried out normal cruiser duties in various parts of the world and in November 1912, she acted as escort to the Royal Yacht Medina. In September 1914, she was sent to the South Atlantic to reinforce Admiral Cradock's Squadron. Becoming flagship of the 1st Cruiser Squadron in 1915 she met her end in the following year when at the battle of Jutland on 31st May 1916, she blew up while under heavy fire from the German battleship "Friedrich Der Grosse". All of her increased war time complement of 893 men were lost - a tragic end to a gallant ship and her crew.