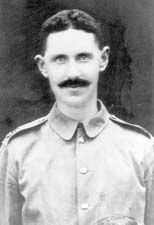 His medals are the Military Medal awarded in June 1918 for gallantry whilst serving in Mesopotamia with the 1st/5th Queen's, the 1914-15 Star, War Medal, Victory Medal, the India General Service Medal with clasp North West Frontier 1918-19 and the Defence Medal. Sadly, Sgt Holdforths group of medals were amongst those stolen in 2003..

On the return to India from Mesopotamia Sergeant Holdforth volunteered for duty with 1st/4th Queen's who served on the North West Frontier. During the Second World War he served with 10th Bn The Royal Sussex Home Guard.

His medals are unique in that he was a pre-war Territorial at Woking, and served with two Queen's Territorial battalions in the First World War on operations. He was one of two members to be awarded the MM for gallantry in Mesopotamia, serving with the 1st/5th Queen's.