But to stand and be still to the Birken ‘ead drill. Is a damn tough bullet to chew
From Rudyard Kipling’s poem, Soldier an’ Sailor Too

On February 25th, 1852 H.M. Troopship Birkenhead steamed out of Simon’s Bay near Cape Town set on course for disaster. The intended destination was Port Elizabeth.

The ship was iron built, and modern, by the famous John Laird shipbuilding family in 1845. She was just over 200 feet long and of 1400 tons. On board were 643 personnel and several officer’s horses. Among these was a draft for the Queen’s (Second) Royal Regiment of Foot consisting of a Corporal and fifty one men under the command of Ensign Boylan.

The evening was calm and clear. The soldiers and families were in their hammocks below and Captain Salmond had retired for the night. Soon after midnight the Birkenhead, which had taken the Regiment to the Cape in the previous year, struck a hidden reef off the aptly named Point Danger, some fifty miles out from Simon’s Bay. A few feet to port or starboard and she would have missed it. The impact ripped her open from the forepeak to just forward of the engine room and the sea poured in.

The Captain, who had been awakened by the shock of the impact appeared on deck half dressed and took immediate necessary measures. The twenty-five women and twenty-nine children, families of some of the soldiers, were brought up from below. Major Seaton of the 74th, the senior regimental officer on board, was requested by Captain Salmond “to be kind enough to preserve order and silence among the men” and to listen for further orders from the Captain.

The only hope, the Captain decided, was to take the Birkenhead astern off the reef and trust there was enough buoyancy in the ship to keep her afloat until rescue came. This proved to be a fatal decision. As the paddles turned astern the ship struck again; this time a great gash was torn below the engine room. The sea gushed into the engine room flooding the furnaces in a great cloud of steam and drowning most of the stokers.

Suddenly, the deck tilted, her stern rose into the air and her tall smokestack crashed down. This killed the men working to free another of the boats and the bow broke away. All the men not engaged were ordered to muster into ranks regiment by regiment. The Captain then gave the order to abandon ship.

Private (later Colour Sergeant) Boyden said of Major Seaton that during the time that Major Seaton’s orders were being carried out one could have heard a pin drop. Major Seaton walked about the deck giving his orders with as much coolness and presence of mind as if he were on parade, entirely forgetful of self.

One of the few officers to survive, Captain Wright of the 91st, wrote afterwards: “The order and regularity that prevailed on board, from the time the ship struck until she totally disappeared, far exceeded anything that I thought could be effected by the best discipline; and it is the more to be wondered at, seeing that most of the soldiers were but a short time in the Service. Everyone did as he was directed, and there was not a murmur or a cry amongst them until the ship made her final plunge. I could not name any individual officer who did more than another. All received their orders and had them carried out as if the men were embarking instead of going to the bottom; there was only this difference, that I never saw any embarkation conducted with so little noise or confusion”.

(It is said that the cry “women and children first” was the standard set by the men of the Birkenhead who died seeing it fulfilled).

Sinking of The Birkenhead »

Campaigns in India and South Africa »

Shipwreck of the Birkenhead 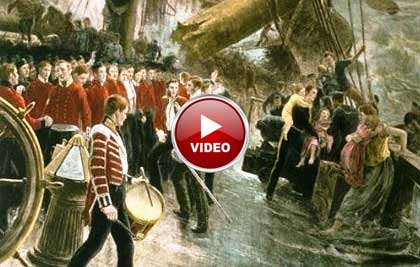