The Coat and Swords of the Khans of Khelat 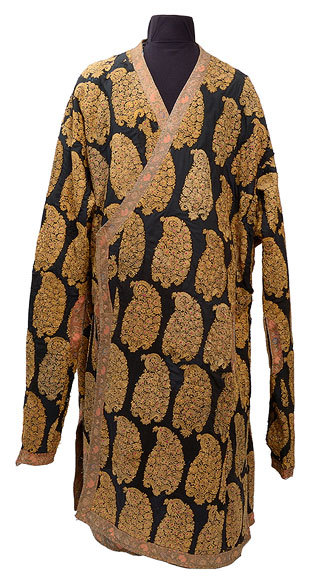 (Click to enlarge)
Illustrated here is Mehra Khan's sword and the sword which belonged to his Shakyasee, or his Adjutant General.

A story of battle, murder and sudden death is recalled by two curved Oriental swords in the museum.

In the summer of 1839, Mehrah Khan, an insurgent Afghan leader, occupied Khelat, 113 miles north of Quetta, and deposed the existing ruler. Mehrah Khan next murdered his predecessor and presented his sword to his own Shakyasee or Adjutant General. He then assumed the title of Khan of Khelat.

A British force, including The Queen's, the 17th Foot and the 31st Bengal Native Infantry, was ordered to recapture Khelat. Terms were offered, but were rejected by Mehrah Khan who swore he would die, sword in hand, rather than surrender. He then sent away his harem and family and prepared himself and his garrison for battle. The women and children of the Shakyasee were not so fortunate, all the females having their throats cut rather than to be allowed to fall into the hands of the British.

The British column stormed Khelat on 13th November 1839, and some desperate hand-to-hand fighting ensued before the citadel was captured. Mehrah Khan himself was twice wounded by bullets, before being killed by No 169 Pte Michael Maxwell of the Queen's (Second) Royal Regiment of Foot. The Khan fell, defiant to the last and sword in hand as he had promised.

In the fighting, the Adjutant of the Queen's, Lieutenant James Simmons was severely wounded while personally engaged with the Shakyasee. His adversary was killed. When it was all over the Shakyasee's sword was placed with the rest of the loot. It was bought by the officers of the Queen's and presented to Lieutenant Simmons in token of his gallant fight with its former owner. The sword, reputed then to be worth a thousand rupees, is serrated on the leading edge of the blade. One wonders if this was the weapon used to dispatch the Shakyasee's unfortunate womenfolk.

Mehrah Khan's own sword, by contrast, is of less formidable appearance, though somewhat longer. These weapons, captured on the field of battle by members of the Queen's (Second) Royal Regiment of Foot, recall a story of gallantry and determination on both sides.

Extract of a letter written by Lieutenant James Egbert Simmons, Adjutant, The Queen's (Second) Royal Regiment of Foot, from Khelat

"I secured the sword of the man I had been engaged with, who was killed. He was the Shakyasee, or Adjutant General, of the Army, he had killed his wife in the morning, having determined to fight to the last, and lose his life like a hero. He and his brother, also a Shakyasee Sirdar, were both killed here, and they fought most gallantly. One of the prisoners, the Wuzeer, or Prime Minister, was brought down by the 'Queen's' to Larkanna, and he recognised the sword I took as that of the Shakyasee, and told me it was worth 1000 rupees. He gave me a history of the sword, which I had previously heard from another native, who also recognized it. He told me that Mehrah Khan had given it to the Shakyasee about three months before, and that the Khan had taken it from the former Khan the day he deposed and murdered him. Mehrah Khan was killed by one of our men, fighting at the head of his Chiefs and people. He died nobly."

Subsequently as Major James Egbert Simmons of the 5th Fusiliers, Simmons was killed on 29th September 1857 leading his men into Lucknow during the siege in the Indian Mutiny.

The sword and the coat belonging to the Khan became the property of Major Simmons and are now on display in the museum.