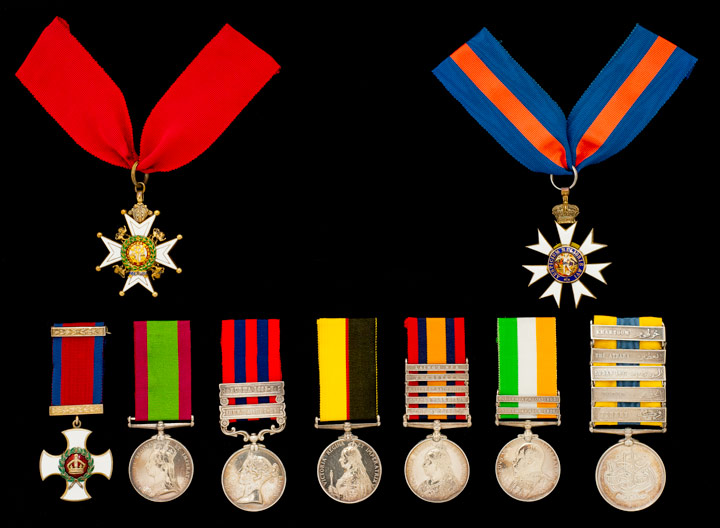 Brigadier General Pink was born on 19th November, 1857, and joined the Regiment from the Royal Wiltshire Militia in 1878, being posted to the 2nd Battalion. He was promoted Lieutenant in March, 1881. He first saw service in the Afghan War, 1879-1880, being employed as officiating Sub-Assistant Commissary-General, Khyber line, and received the medal for this campaign.

He proceeded to South Africa with the 2nd Battalion, and served with it throughout the war, being in command from 30th November, 1900, to 31st May, 1902. He was mentioned in Despatches (L.G. 16th April, 1901), and received the Queen's Medal, with five clasps, and the King's Medal and two clasps. He was also made a C.M.G. On 16th November, 1904, he was promoted Brevet Colonel. On 2nd March, 1905, he was promoted Lieutenant Colonel and appointed to command the 1st Battalion then stationed at Sialkote. Very shortly after he had assumed command, the Battalion was awarded the Lord Kitchener Trophy for the most efficient Infantry Battalion in India. His period of command ended in March, 1909, and he was then promoted Colonel and appointed a C.B. Thus ended over thirty-one years' service in the Regiment, years full of incident and achievement.

After a period of half pay he was again employed with the Egyptian Army from 28th September, 1909, until 20th May, 1910, and on 11th November, 1911, he was appointed to command No. 10 District at Hounslow and Officer il c Records, and held the appointment until 13th May, 1914. On the outbreak of war he was appointed Brigadier General, and served at home in various appointments until he finally retired in September, 1916.