The Spences of the Thirty First Regiment

In a case in the Regimental Museum the medals of the Spences lie side by side. James Spence was about 24 years older than Frederick, and they were probably cousins. During their long and distinguished careers, both commanded the Thirty First Regiment. Although both officers are mentioned in the History of The East Surrey Regiment, the index is incomplete and inaccurate. First, there is no mention of James in the index; second, all the references to Frederick relate to James and third, there are many pages in which one or other of the Spences is mentioned in the text which are not listed at all in the index. James was a passenger on the ill-fated Kent in 1825.

Briefly, James was commissioned in 1808 and retired as a lieutenant colonel in 1848, after 41 years service. Frederick was commissioned in 1829 and retired as a major general in 1863. The Regimental History shows James Spence in the list of officers who served with the 2nd Bn Thirty First in the Peninsular War, but this is doubtful. In the first place he did not receive the Peninsular War medal, and secondly he was known to be serving with the 1st Bn Thirty First at Genoa in April 1814.

Both Spences were with the Thirty First in the 1st Afghan War, 1839-1842, James as a captain and Frederick as a lieutenant. However, only James stayed on to serve thoughout the Sutlej Campaign, 1845-1846. He assumed command of the Thirty First at the battle of Moodkee, when the Commanding Officer, Lieutenant Colonel Byrne was wounded. He remained in command for the battles of Ferozeshah, where he personally led the attack on foot, Badowal and Aliwal. He was promoted lieutenant colonel in December 1845 and was appointed to command the 1st Brigade for Sobraon, (where his horse was killed under him), the final action of the campaign. For his distinguished services, Lieutenant Colonel James Spence was made a Companion of the Bath.

Frederick served with the Thirty First as a major in the Crimean War, 1853-1856 and served with his regiment in the Crimea in 1855, including the siege and fall of Sebastopol and the attacks of 18th June and 8th September. In November of that year he was promoted to the command of the regiment. On the conclusion of the campaign he was awarded the CB. He commanded the 31st Regiment throughout the campaign in the North of China in 1860, and was present at the action of Sinho and the storming of Tangka. He was also present during the operations against the Taepings in the vicinity of Shanghai in 1862, which resulted in the taking of the stockade at Nanhsiang, the capture by escalade of the walled cities of Kadin, Tsinpoo, Tsolin, and the fortified town of Najow. He was created a KCB following the end of the war in China.

Major General Spence died at his residence, Englefield Green, Staines. He was 85 years of age. He had been a Justice of the Peace for Surrey. 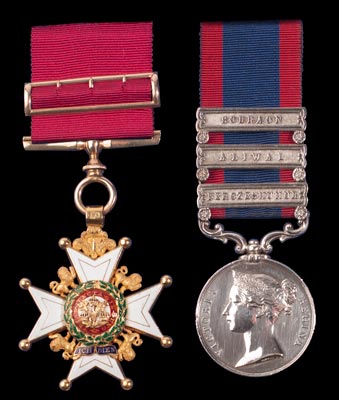 The medals of Lieutenant Colonel James Spence CB. The 31st Huntingdonshire Regiment. The medals are:

The medals of Major General Sir Frederick Spence KCB. The 31st Huntingdonshire Regiment. Other medals and insignia on display are: