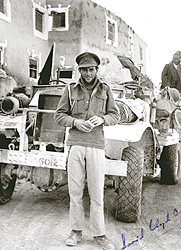 Major General David Lloyd Owen as a young officer of the Regiment won great distinction in the 1939-1945 War, and then went on to a highly successful military career.  His wartime achievements came in the main while serving with the LRDG (The Long Range Desert Group) and then the SAS.

He was born on 10th October 1917 and after school at Winchester was commissioned into The Queen’s Royal Regiment going out in 1938 with the 2nd Battalion as part of the force containing the Arab revolt.  With the entry of Italy into the War 2nd Queen’s were deployed to the Western Desert, and Lloyd Owen commanded a Company during General Wavell’s remarkable destruction of the Italian Army following the victory at Sidi Barrani.  Soon afterwards he got himself accepted for the LRDG and undertook his first patrol across the desert in October 1941.  Throughout 1941 and 1942 the LRDG approaching from the deep desert kept watch on enemy movements many miles behind the front and also supported SAS and Commando forces in their raids behind enemy lines.  For his leadership and personal bravery throughout this period Lloyd Owen, as a Lieutenant, was awarded an MC.

With the end of the war in North Africa the LRDG were deployed by sea and air to the Balkans, and in December 1943 Lloyd Owen became Commanding Officer of the Group.  He achieved conspicuous success in directing and leading from the front offensive operations designed to harass and cut the lines of communication of German forces in the Balkans and Northern Adriatic.  In one of the largest of these, and his last, in the Albanian mountains he fractured his back on landing by parachute, but insisted on remaining in command for five weeks to ensure the success of the operation; he was awarded the DSO, having also been ‘Mentioned in Despatches’.

On recovery from his injuries he was successively MA to the Supreme Allied Commander in Italy, to the Chief of the Imperial General Staff in 1949, and finally in 1952 to General Sir Gerald Templar, the High Commissioner in Malaya at the height of the emergency there.  For this last appointment he received a further ‘Mention in Despatches’ and was awarded the OBE.

After further appointments in 1957 he became the last Commanding Officer of 1st Battalion The Queen’s Royal Regiment at Iserlohn.  This could have been a difficult time as amalgamation with the East Surrey Regiment had already been announced, but he made it memorable and satisfying for all who served under him enhancing greatly the Regiment’s final reputation.

Next he commanded a College at Sandhurst before becoming Commander 24th Infantry Brigade in East Africa, and his time included deployment to Aden for the Radfan operations.  Then after the Imperial Defence College he was promoted Major General to command in Cyprus and subsequently Near East Land Forces, before finally serving as President of the Regular Commissions Board; he was appointed CB in 1970.

In retirement Lloyd Owen worked for the Wildfowlers Association of Great Britain, being Chairman from 1979-1985, and he involved himself actively in a number of Charities, including the Craft Club.

Lloyd Owen married Ursula Barclay of a distinguished Norfolk family in 1947, having three sons.  He published two books covering his wartime experiences with the LRDG – ‘The Desert my Dwelling Place’ and ‘Providence their Guide’.