Welcome to the Website of The Queen's Royal Surrey Regiment 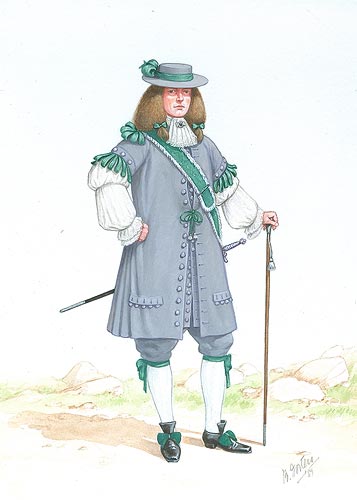 This website tells the history, traditions and customs of the two Infantry Regiments of Surrey.
The Queen’s Royal Regiment (West Surrey), the 2nd of Foot, was England’s oldest infantry Regiment formed in 1661. The East Surrey Regiment was formed in 1881 by the amalgamation of the 31st who first paraded in 1702 as a Marine Regiment and the 70th who were raised in 1758. These two Regiments were amalgamated in 1959 to form The Queen's Royal Surrey Regiment.

The website provides details of the history, the museum at Clandon Park, near Guildford and the Regimental Association which arranges reunions and looks after the welfare of our old comrades and when necessary organises benevolence grants to those in need.

The British Army thrives on traditions, regimental pride, service to the Nation and loyalty to the Crown. This heady mixture produces a tight feeling of esprit d’corps and that team fighting spirit that has resulted in the superb battle effectiveness of the British Infantry – the envy of many other nations. 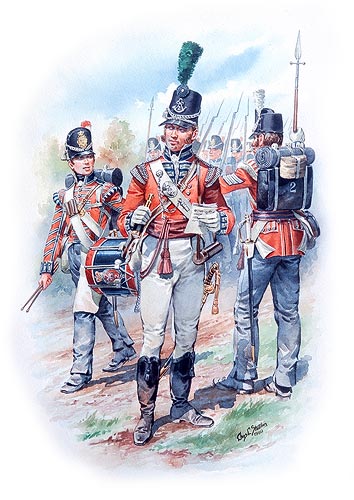 But how often have we heard that there is never enough Infantry for the Country’s needs? Successive Governments throughout history have sought cuts through reductions of battalions or amalgamations of Regiments.

Each change dilutes that tight-knit band of brothers who have close connections with the towns and villages of their county. The history on this website illustrates this most effectively. Both Regiments have been awarded many Battle Honours and Distinctions, bourne on their colours which can be seen on this website, or on a visit to the museum.

During the Second World War the combined casualty figures for both Regiments was 3788 Officers, NCOs and men who made the supreme sacrifice. Their names can be seen in the Books of Remembrance in the Regimental Chapels and on War Memorials throughout Surrey, South London and elsewhere. 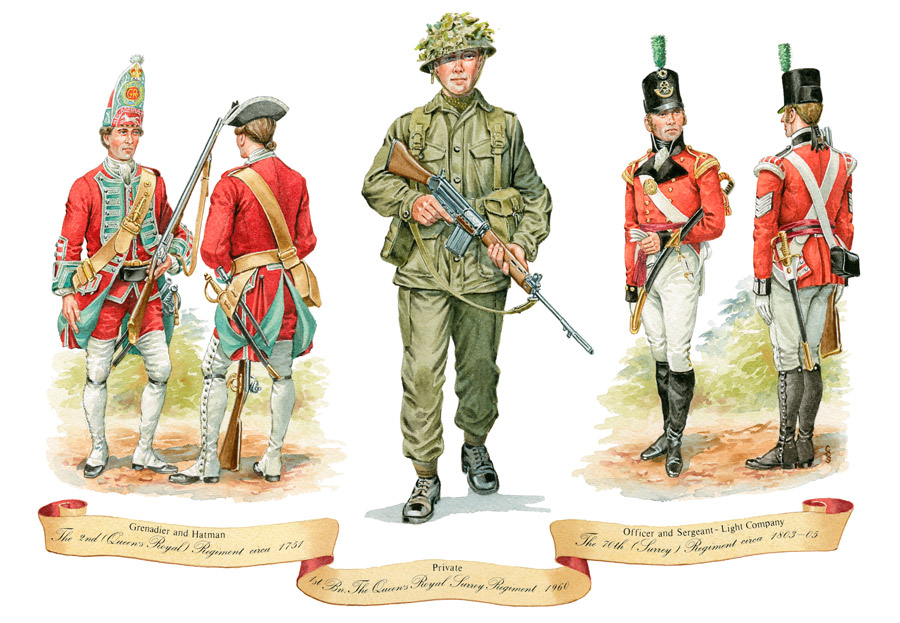 The British Army strives to achieve excellence, young soldiers are taught that if they do half as well as their predecessors they will have done a good job. The enduring theme of so many campaigns is the humour, patience, initiative and courage of the British Infantryman.

This website is dedicated to all our “Tommys” who have worn our cap badge and served in the Infantry Regiments of Surrey.

Please note that the regimental collection of historic documents, books and photograph albums has now been transferred to the Surrey History Centre.

The Collection is also available for public consultation.

See Buried Battles and Veterans Voices in which our Regimental forbearers tell their stories... Hear CSM Jolley and Sgt Martin of 2nd East Surreys taking about their time as Japanese POWs and the stories of those who were forced to surrender at Dunkirk and spent 4 long years a German POWs. 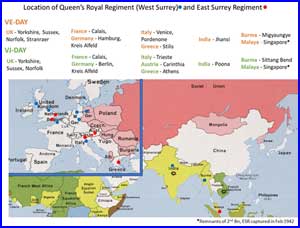 Museum Update
The Museum’s administrative functions continue to operate from an office in the Surrey History Centre.T he Museum office can be contacted directly by personal visit, telephone or email.