Back in India independence and partition came at midnight 14/15th August 1947. The predominantly Muslim Pakistan came into being as a separate country. Appalling bloodshed followed as Muslim, Hindu and Sikh minorities sought safety in one country or the other. Mahatma Gandhi was suspected by extremists of favouring the creation of a separate Muslim state and was assassinated in 1948 by a Hindu Brahmin. The Indian Prime Minister, Jawaharlal Nehru, tried to preserve his Congress Party as a secular organisation. In 1960 he was quoted as saying “The danger to India is not communism. It is Hindu right wing communalism”. The last major problem he faced before his death in 1964 was another round of blood-letting between Hindus and Muslims in Bengal and Bihar. During his 27 years in office he experienced demands for a linguistic state in the Telegu-speaking districts of Madras Province, revolution in Nepal, rebellion by the Naga tribes in Assam, the annexation of Portuguese Goa and the State of Hyderabad, persistent disputes with Pakistan over Kashmir which continues to this day, boundary clashes with China over Tibet, and continuing bitter disharmony between the Sikhs and the Muslims in the Punjab.

“I was brought up to feel proud of much that we had done. Certainly in India, with all its history, religion and ancient forms of despotic rule, Britain has a story which will look quite well against the background of the coming hundred years”.

Many of those who served there will share those sentiments.

As to the Surrey connection, 1st Queen’s and the 4/15th Punjab Regiment fought together in the same brigade in World War Two in the Arakan, at Kohima and during the re-occupation of Burma in 1945, and have maintained contact since then despite many changes in regimental organisation on both sides.

When partition came the Pathan and Punjabi Muslim companies of the 4/15th Punjabis became part of the Pakistan Army as the 12th Punjab Regiment. Its Sikh and Jat companies remained in the Indian Army. As the British Army reduced in size, reorganisation of the infantry included amalgamation of the Queen’s Royal (West Surrey) Regiment and the East Surrey Regiment to become one Queen’s Royal Surrey Regiment, to be followed by the Home Counties infantry regiments becoming one all-embracing Queen’s Regiment, which has since amalgamated with the surviving infantry regiment in Hampshire to become the Princess of Wales’s Royal Regiment. 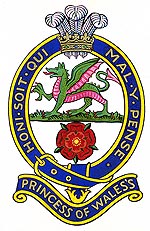 The Princess of Wales’s Royal Regiment’s predecessors are twelve Foot Regiments of the Line which became its county regiments. Through them its alliances now include the12th, 14th, 15th and 17th battalions of the reorganised Punjab regiment of Pakistan. Its cap badge incorporates the ostrich plume insignia awarded by King George III in 1810 to the 77th Regiment, to commemorate its distinguished service in India. Its sleeve badge displays the Royal Tiger. In 1826 King George IV authorised it to be worn by the 67th Foot, later the Hampshire Regiment, in recognition of its service in India. The battle honours selected to be carried on the Colours of the Princess of Wales’s Royal Regiment include Moodkee, Sobraon, Afghanistan 1879-80, Burma 1885-87, North West Frontier India 1915, and Defence of Kohima. They well reflect the Surrey connection.