1943 marked the start of the 2nd World War Campaign in Italy, which saw the first return of Allied Armies to Europe. The Regiment was more fully represented in the Campaign than anywhere else during the War, 6 Battalions of the Queen’s Royal Regiment and 2 Battalions of the East Surrey Regiment fighting in the Campaign. Some 1393 officers and men lie buried in Italian War Cemetaries, and a total of 26 Battle Honours were awarded, 17 to the Queen’s and 9 to the East Surreys. Of these each Regiment before amalgamation carried 4 each on their Colours, the Queen’s SALERNO, MONTE CAMINO, ANZIO and GEMMANO RIDGE, and the East Surreys SICILY 1943, SANGRO, CASSINO and ITALY 1943-45

As shown by the Battle Honours 1st Battalion East Surreys as part of 78 Division (Battle-Axe Sign) fought in the capture of Sicily which started on 10th July 1943. Then on 9th September 1943 the main invasion of Italy took place at SALERNO. Three Battalions of the Queen’s forming 169 Infantry Brigade of 56 (London) Division, (Black Cats) landed on the first day, and they were joined six days later and then relieved by a further three Battalions who formed 131 Infantry Brigade of 7th Armoured Division (Desert Rats). This assembly of six Battalions of one Regiment, the 1/5th 1/6th 1/7th and 2/5th 2/6th 2/7th, was a unique event, and is now recognised as a special Regimental Day. After heavy fighting against intense German counter-attacks a breakout from the initial landing area was made, and 131 Brigade led the advance across the Plain of Naples and towards the mountains of Central Italy. The Germans resisted strongly as they prepared a winter defensive line, the Gustav Line based on CASSINO, which guarded the main road to Rome. Before this line was reached the outlying massif had to be cleared - on the British side (the invasion at Salerno had been carried out with 56th Division being part of the United States 5th Army) the massif was MONTE CAMINO. This, like most mountains in Italy is a bare rocky feature and is some 3100 feet high, and an attempt to capture it in early November by the Guards Brigade of 56th Division was unsuccessful. When the assault was renewed on 2nd December, as part of a co-ordinated 5th Army attack, this involved the whole Queen’s Brigade with 2/5th Queen’s leading the assault up the almost vertical, in places, face of the mountain. It took 4 days to clear the mountain and occupy the small, now ruined, monastery at its summit. The commanding officer of 2/5th Queen’s, Lieutenant Colonel JY Whitfield, who 8 months later was to be appointed to command 56th Division was awarded the DSO, and received at the time the “Red Star Order” from a Russian Army General, who was leading a liaison delegation to Italy - he said “You too have mud and blood” - the former highlighting the heavy rain of winter in Italy, which was snow at times at the top of CAMINO.

Meanwhile on the east coast of Italy the 8th Army led by the 78th Division advanced steadily northwest up to the River SANGRO. To cross this required a three-week operation in which 1st Surreys played a leading part. As on the west all action was much hampered by rain and mud. At the same time on the west 7th Armoured Division with 131 Queen’s Brigade was withdrawn from action so that it could return to the UK to take part in the invasion of Normandy.

With the Allied Armies closed up to the Gustav Line a further 5th Army action was planned. This involved crossing the River Garigliano followed by a landing by a joint US/British Force at ANZIO 60 miles up the coast, and a crossing of the River RAPIDO with the object of taking CASSINO. The Queen's Battalions in 56th Division successfully crossed the Casigliano, and the landing took place at ANZIO. Regrettably however the US Army crossing of the Rapido failed, and it was not until May 1944 after three further attempts that CASSINO and its Monastery were captured. Unfortunately, also the ANZIO landing did not fully succeed, and with German Forces building up to destroy it 56th Division was transferred in order to reinforce the Beachhead. The Division’s arrival coincided with the major German counter-attacks, and Battalions were deployed into the front line straight away, with 2/7th Queen’s shortly being committed to the special task of extricating a US Army Infantry Battalion, the 2nd/157th, who were holding out isolated and surrounded one mile forward of the front line. The task was completed but involved the almost complete loss of the 2/7th Battalion. After nearly four weeks during which all Battalions had been heavily and continuously engaged, 56th Division, by then in a very reduced state, was sent to Egypt to reinforce and retrain.

The Battle of Cassino Part I 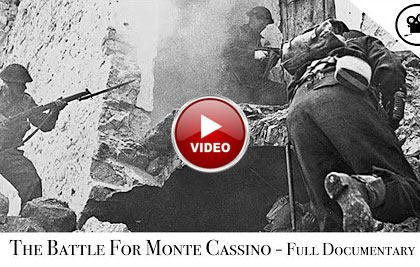 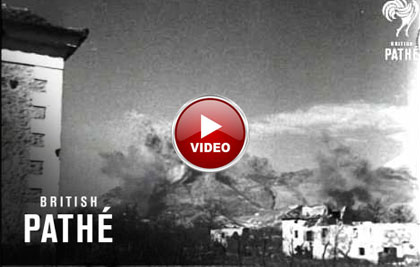